JUST when you thought Harry and Meghan couldn’t out- parody themselves . . . along comes Oprah.

I’m not sure what grates the most.

👑 Read our Meghan and Harry live blog for the latest news...

The fact that since harrumphing away from the Royal Family, citing a need for greater privacy, they’ve signed deals with Netflix and Spotify, given self-important weekly Zooms (from their very private own front room) or, now, given a warts ’n’ all interview to the planet’s most famous celebrity interviewer.

Despite their rather grand designs to end global poverty, is it not a bit ironic that Harry should give his first interview to multi-millionaire diet ­company ­ambassador James Corden? A man literally being paid to eat less.

Anyway. While Harry came across as pretty likeable in his open-top bus chat, we do not know what percentage of ­monies made by the couple post-Megxit have been distributed to the needy.

Like her celebrity pals, Oprah preaches philanthropy and wellness to her millions of followers.

She also practises what she preaches, donating millions to ­charities across the world, including the Clinton Foundation, the Born This Way Foundation and Women For Women International.

This latest televised chat wasn’t a Comic Relief endeavour. This was purely about self-advancement.

I really don’t care that the self-satisfied trio, sitting within the sun-dappled grounds of a mutual pal’s sprawling ­mansion, are worth a combined £1.9billion and use private jets like you and I use the Northern Line.

And you and I probably don’t harp on about climate change.

No, what’s really, really galling is that the couple — despite Harry’s £40,000-a-year Eton education and Meg’s college degree — are so wilfully ignorant.

Even the language of Sunday night’s Oprah spoiler was inflammatory.

Billed as “two teaser clips”, the Hollywood Reporter breathlessly gushed about a “first look at the 90-minute primetime special.”

THEY PROVE THEMSELVES MASTERS OF CONTRADICTION

No one expects Meghan and Harry to sit there in coffee-stained pyjamas, like two Stigs of the dump, but the actress’s decision to wear a £3,300 Armani dress, and the late Princess Diana’s Cartier bracelet, jars.

Because showbiz is inherently still quite sexist, nobody has yet bothered to find out where Harry’s nice suit was from. But it probably wasn’t Florence & Fred.

In their fashion choices, the couple again prove themselves masters of contradiction.

Earlier this week they updated their Archewell website, outlining their non-profit works.

Gone went a touching photo of toddler Harry sitting on the shoulders of his late mother. In its place, a photo of the big-hearted Sussexes handing out food to low-income families at a charity event in LA.

But in their tell-all chat with superstar Oprah — a classy Jeremy Kyle, if you will — Harry talks at length about Diana’s undeniably tragic death.

Losing a mum at any age is heart-breaking, and Harry has every right to be bitter and grieving still. Grief doesn’t have a timeframe.

But by claiming his greatest fear is “history repeating itself”, while describing the process of quitting the Royal Family over the past 12 months as “incredibly tough”, he has shown rhino-skin levels of insensitivity.

No, mate. “Incredibly tough” is losing loved ones to Covid-19, losing your job or losing your home.

It is not moving to a £12million home in California, and making a reported £120million in your first year in the workplace.

AS if things weren’t depressing enough already, yet more grim news at the weekend.

According to the Sunday Times’ Style magazine – a publication achingly ahead of the sartorial curve – the high heel is back.

Apparently, after a year of slippers – those back in the office notwithstanding – we will all be strutting around in four-inch Louboutins come the summer.

And Simon Cowell will be digging out the Cuban heels. Thank God, then, for Twiggy.

As someone who has repeatedly been likened to a (bad) drag queen in heels – stomping across London’s most genteel bars and clubs – I couldn’t agree more.

Zoom malfunctions affect us all 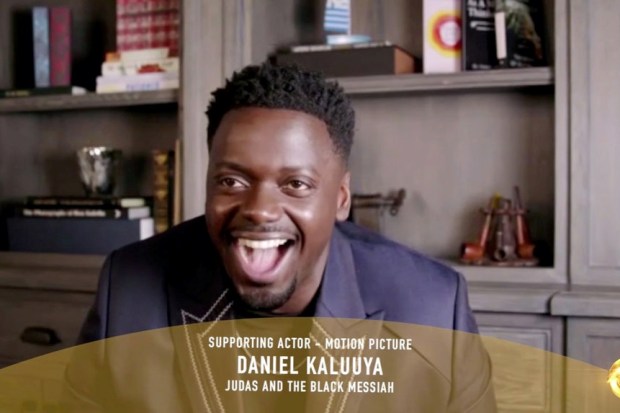 IN a brilliantly relatable-yet-unrelateable moment at the Golden Globes on Sunday, the awards were blighted by a Zoom malfunction.

A year on, and here we are – still cocking up on Zoom.

Carrie a victim of hate

THE levels of scrapping, bitching and backbiting are worse than those seen in any playground, Tudor court or a particularly Machiavellian Shakespearian play.

In the latest hatchet job, the young mum has been accused of trying to damage the careers of two top female civil servants, and urging the PM to sack another female Whitehall official.

And a Tory think- tank believes her influence in No 10 needs to be investigated.

Judging by the headlines, you’d think she was the first politician’s partner to have ever, privately, expressed an opinion.

Do we think for one picosecond shrinking wallflower Cherie Blair never gave Tony a piece of her barrister mind?

And what about Theresa May’s infamous walking holiday with Philip in 2017?

She later declared it was consulting with her husband in his snazzy little hiking boots that convinced her to call a (disastrous) snap General Election.

Carrie, who previously worked as the Government’s head of comms, isn’t wholly uninformed on the machinations of government.

Yes, she’s unelected – but the vitriol levelled at her is both rank hypocrisy and misogyny.

Trick of the light

A RECENT study has shown the reason we’ve all become so fat in lockdown has nothing to do with becoming idle, Netflix-gorging, sofa-dwelling, binge-drinking, Joe Wicks-dodging lumps.

Instead it’s all down to our pesky “gravitostats” – a bunch of cells designed to suppress the appetite when we start to put on weight.

But because we now spend so much time on our ever-expanding bottoms, our gravitostats have tricked us into thinking we’re lighter than we really are – telling the body to have its fill, to order that extra bucket of KFC with a spot of Stork on the side.

Being around a stone heavier than this time last year, that’s my excuse – and I’m sticking to it.

FORMER Love Islander Amy Hart (me neither) reckons influencers flaunting their wares in Dubai should be cut some slack, because “influencing is a credible and valid job”.

So the abuse directed at these six-packed, narcissistic, filter-loving twentysomethings is deeply unjust.

Actually, she has a point. The reality is that in a rapidly shrinking employment pool, these young entrepreneurs are freeing up jobs for others.

They aren’t claiming benefits or breaking laws. Indeed, their taxes must be astronomical.

By simply making the most of their limited talents they are, in some small way, giving back.

Not fit to rule

ON the subject of fatness – something we all know Covid preys upon – the Government’s handling of gyms and leisure centres has been shambolic.

So as of March 29, we’ll be able to have a pint in a pal’s garden but not get on a treadmill.

Nope, getting ourselves fit won’t be allowed until April 12.

We shouldn’t be surprised though.

After all, this is coming from a largely male, middle-class, middle-aged ruling body who previously declared that barbers should stay open for beard trims . . . while shutting down hairdressers for women.

The fact that Boris has the luxury of a £70-an-hour personal trainer, and Rishi Sunak can enjoy his £2k-a-pop Peloton bike from home, has nothing to do with any reluctance to letting the rest of us work out.

THE whole Lady Gaga affair – her shot dog-walker and two stolen Frenchies – has been disturbing from start to finish.

As a new mum myself, to ten-week-old Dachshund Dora, I would cheerfully murder anyone who tried to steal or maim her.

Mom ‘killed her son, 6, dumped his corpse in river & claimed he’d wandered off’

But by putting up a 500,000-dollar reward, the singer has put a target on every famous dog-owner’s back.

The only victors in this sorry saga are pet insurance companies.

Council tax rebates worth £150m are owed to households that paid in advance, experts say

London is close to running out of drinking water, singer says